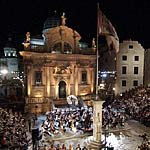 The oldest cultural festival in Croatia, Dubrovnik Summer Festival takes place from 10th July to 25th of August in Dubrovnik presenting rich and vibrant theatre programme in the fields of theatre, ballet, classic music and opera.

The Dubrovnik Summer Festival presents a rich programme of classical music, theatre, opera and dance on more than 70 open – air venues over 47 days in summer each year.

Every story has its beginning. Great stories have many beginnings. And there is no absolutely reliable historiographic method to distinguish the truth. Or is it, maybe, impossible for great stories to start with just one beginning? I guess that’s why every History has to have its Prehistory…

The history of Dubrovnik Summer Festival was – undoubtedly – conceived during thirteen nights of September 1950, when a real town persistently and uniquely transformed itself into an imaginary Town. Ten years later, French writer Claude Aveline, who had taken part, wrote how he could not surmise that he was attending “the birth of one of the most glorious festivals of our time”.

The prehistory of the Festival is not as easy to reach. It seems that its rudiments go back as early ad the rudiments of the Town itself. As if they both grew out of the medieval urban matrix. They put forth leaves within humanist horizons, flowered in renaissance and baroque. In the eighteenth century they grew ripe. Then they tire in, so it seemed, inseparable co-operation in the dawning of the national epoch, when the imaginary Town irreversibly loses its nationally constructed counterpart. But a genius locus does not tire! The energy of the millennial history keeps on shining with artistic endeavours. Ever since, by command of its historical being, sharing the destiny of other Croatian lands.

The aforementioned genius loci gave power to the ideas leading to the constitution of the imaginary festival Town. Rumour has it that even Reinhardt couldnt resist them at the eve of World War I. And than in 1993, the occasion being PEN World Congress in Dubrovnik, Gunduli?s “Dubravka” takes place in front of Rectors palace, for chosen international audience. It was a starry dress rehearsal of the birth of Dubrovnik Summer Festival. But it took horrid expectation in new age martyrdom before the happy moment.

Both history and prehistory from the very first artistic steps of the newborn Festival were at the same time a precious impulse and a limitation. Controversy had been noted a long time ago. And it lasts until nowadays. Because true art will never be a copy of no matter how glorious tradition. The strategy of this obstinacy was written by no other but a sequence of happy festival nights that divined reality. Nights in which Beauty was won.

Many an artist danced the Festival reel. Domestic and foreign. Famous ones and those who will come to fame under Dubrovnik sky. In the course of the half a century names and generations followed each other. But all of them were and always will be enchanted by siren call of the ancient Njarnjas and unrepeatable Dubrovnik, holding in common with its audience, creating at least temporary imaginary Town.

This is history without names or numbers. There is just too many of them, and they are all equally important. For the Festival is nothing but an imaginary parade. And a dream that rounds up that little life of ours.